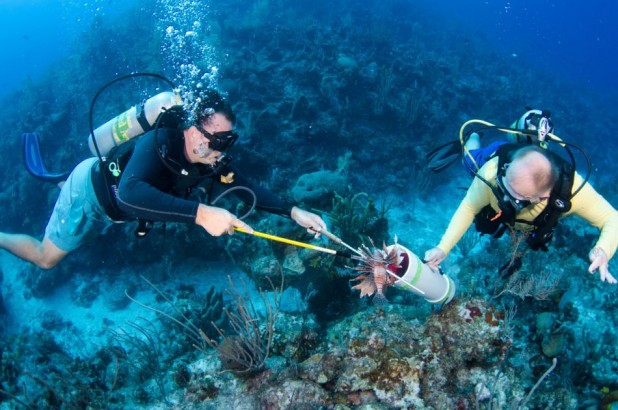 An environmental project to remove the invasive Lionfish from Cayman Islands waters. By participating you will be doing your part as a scuba diver.

Our original weekly Lionfish culling trips had been so effective since 2011, they became no longer effective in making any further impact on controlling the invasive Lionfish populations.  It is important to adapt to this next phase of protecting our reefs with a new line of defense.  Our new Lionfish culling strategy, provides more targeted culling where it is needed most, rather than the blanket approach that was necessary in the beginning. Our three pronged approach still allows divers to buddy with a licensed culler as spotters, or take it one step further and become a certified culler and help with Reef Patrol Duty on an ongoing basis.

1- Reef Patrol Buddy
US$130 fee per two tank, $100 per 1 tank. Does not include cost of dive boat trip. Buddy with a licensed Lionfish Culler Staff and learn hands on how to do a good deed for Cayman's reefs and rid them of the invasive Red Lionfish. Cull, de-spine, fillet and take home to eat, or have Eagle Rays fix you up some of their famous Lionfish Tacos.

This dive service is part of an environmental project to remove the invasive Lionfish from Cayman Islands waters. By participating you will be doing your part as a scuba diver to help protect our coral reefs.

3- Reef Patrol Duty (Dive Staff Only)
A Licensed Lionfish Culler staff member, patrols the reef to remove the invasive species. This can take place on any trip where suitable and at sites where Lionfish have been sighted and reported.

The Red Lionfish were first spotted in Grand Cayman in 2009 and have since established a large and growing population.  In January 2010, Ocean Frontiers decided it had reached a point where direct action needed to be taken.  The Red Lionfish were eating our native species of juvenile fish and damaging the balance of our fragile coral reef ecosystem.  Red Lionfish were introduced to the Caribbean region by mankind and we feel it is our duty to make our best efforts to try and un-ring the bell.

Whilst we don't expect to ever completely remove the Red Lionfish from it's new home in the Cayman Islands,  we have managed to keep their population in check and do our best as scuba divers to reduce the numbers to a minimal level.

What is the habitat preference and behavior of Red Lionfish (Pterois volitans)?

1. Lionfish exhibit high site fidelity, i.e. they do not move much, and they are commonly seen in a nearly motionless posture with the head tilted slightly down.
2. Lionfish have been sighted in a wide variety of habitat types including; artificial sites, canals, harbors, estuaries, mangroves and shallow and deep reefs. From observations they appear to be at home and fully adapted to all these differing habitats.
3. Lionfish have been observed in water as cold as 13°C/56°F off the southern coast of Long Island, New York and as warm as 27°C/81°F in areas such as Turks and Caicos Islands, showing a tolerance to a wide range of temperatures.
4. It has been revealed that Lionfish stop feeding at temperatures of 16°C/61°F and below and that the average lethal low temperature is 10°C/50°F.
5. Lionfish are now being found in a large depth range from 0.6 metres/2 feet to 175 metres/574 feet, well beyond recreational dive depth limits. What are the hunting methods of the Red Lionfish and what is the prey?
1. Given the tendency of the Lionfish to retreat to areas of hiding by day, this species was thought to be mostly nocturnal. However, recent studies have now shown that Lionfish have been observed feeding during the day.
2. Hunting behaviour includes the Lionfish hiding in unexposed places during the day, with its head down practically immobile, to stalking and cornering its prey by use of the outstretched and expanded pectoral fins when in full ambush mode. Lionfish prey is ultimately obtained with a lightning-quick snap of the jaws and swallowed whole.
3. The Lionfish is an undiscerning predator of small fish, shrimps, crabs and similarly sized animals and research has shown that of analyzed stomach contents, 70% was comprised of fish and 30% were crustaceans. Cannibalism has also been observed for this species in the wild as well as in captivity.
4. The most abundantly found prey in the Lionfish stomachs included basslets, shrimp and gobies and other cleaner fish. Other stomach contents included whole crabs, whole sand divers, jawfish with the eggs still in its mouth, and even juvenile groupers.
5. When consuming a large meal the Lionfish is capable of expanding its stomach over 30 times in volume, it is also capable of long term fasting and can go without food for periods of over 12 weeks without dying.
6. In its native range the Lionfish consumes 2.5% - 6% of its body weight per day. 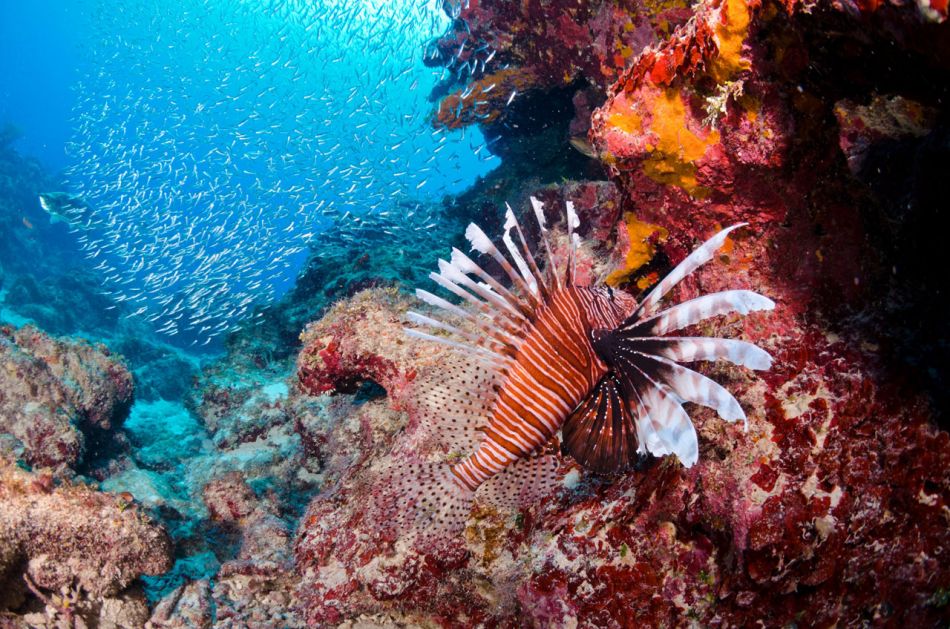 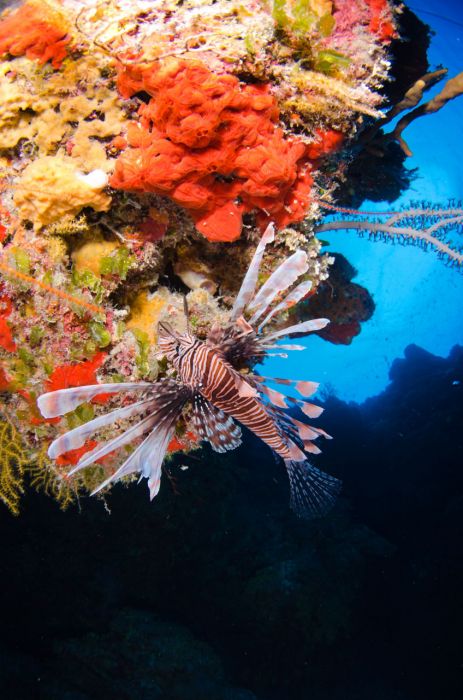 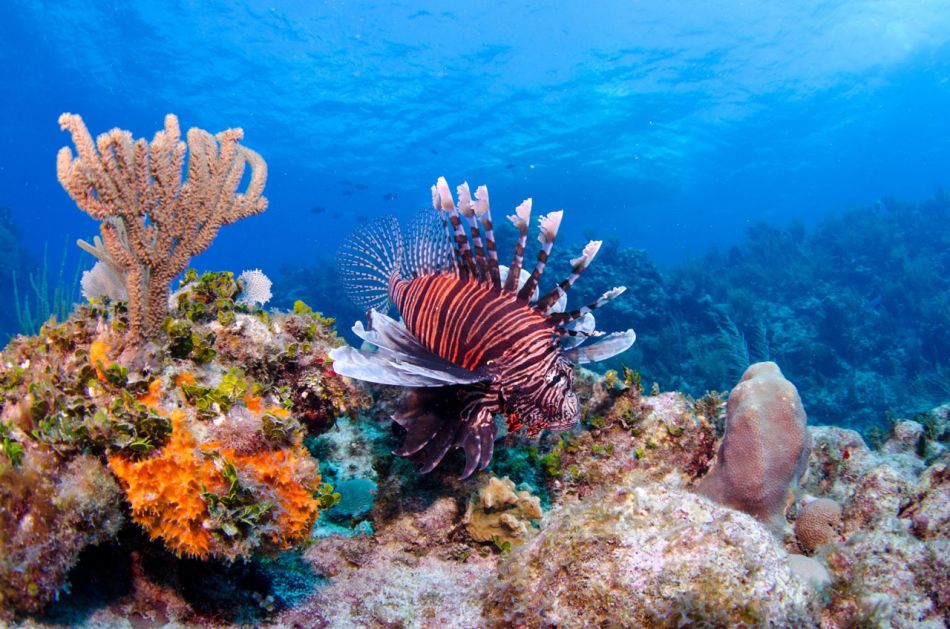 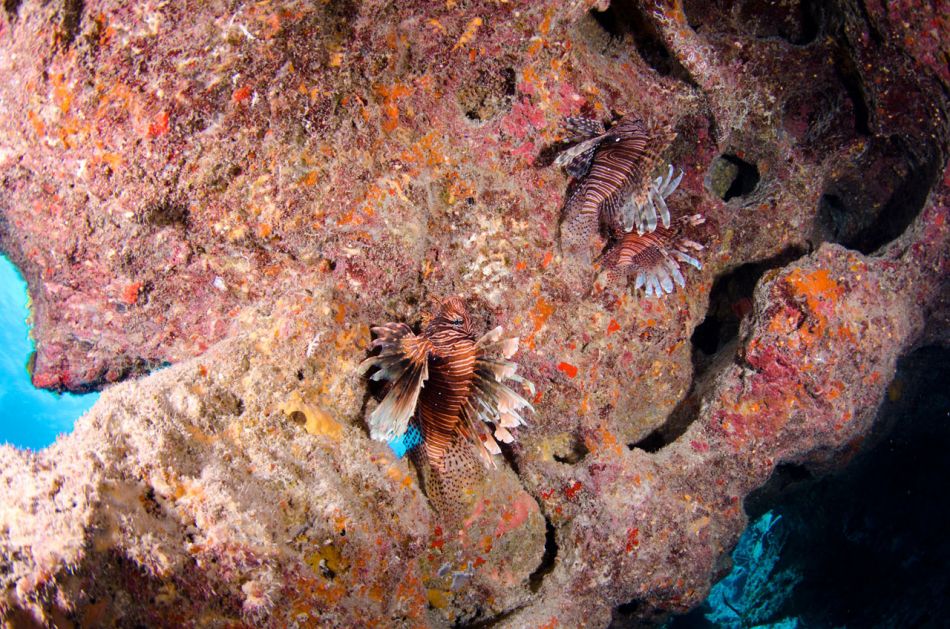 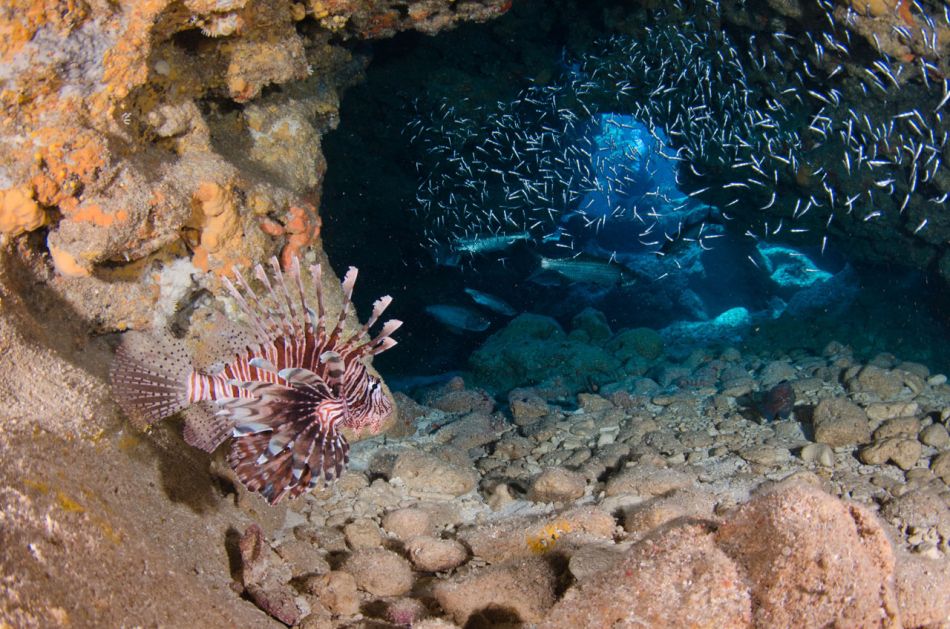 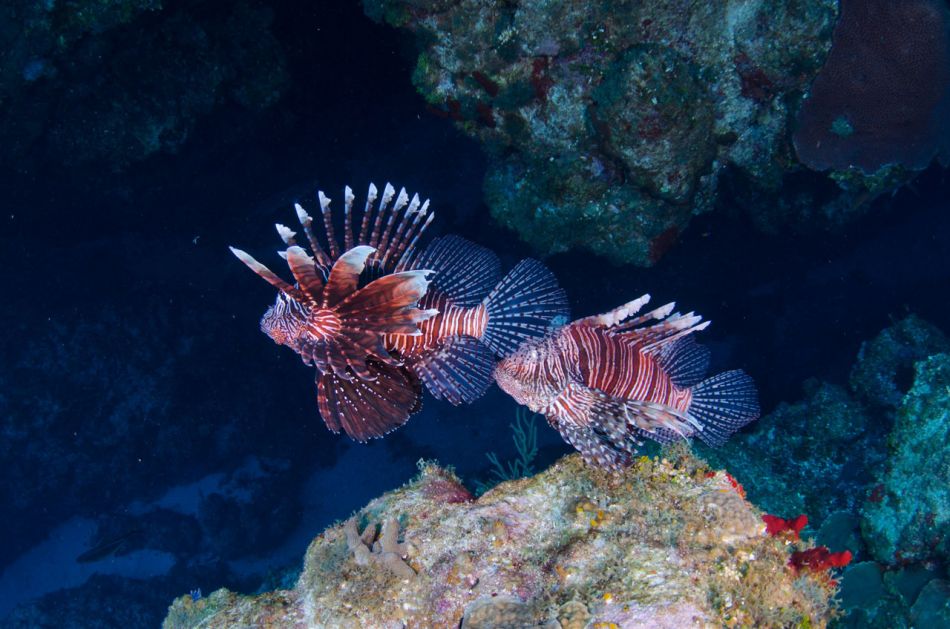 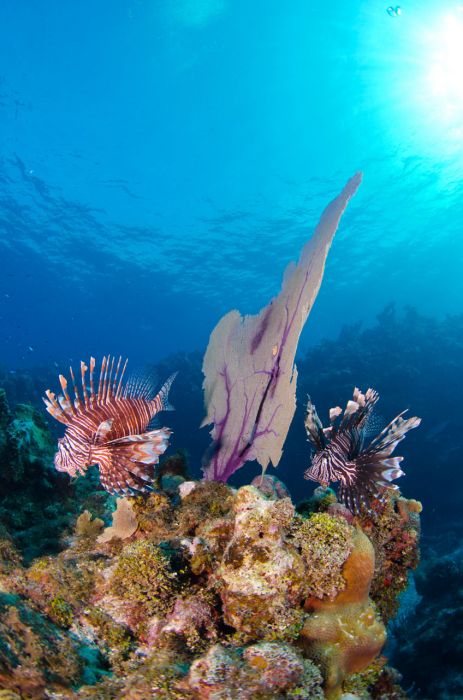 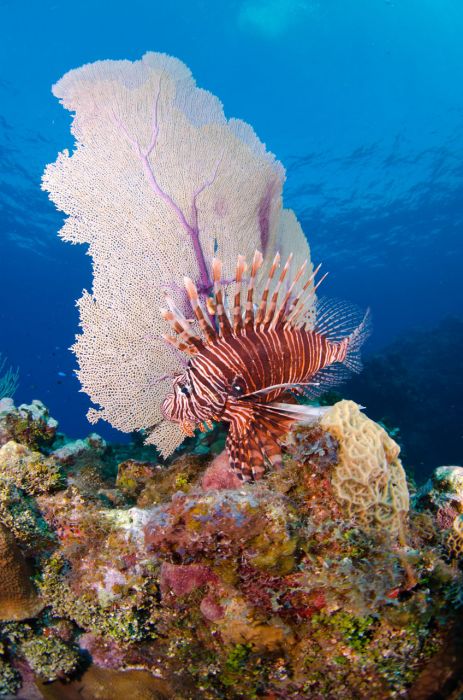 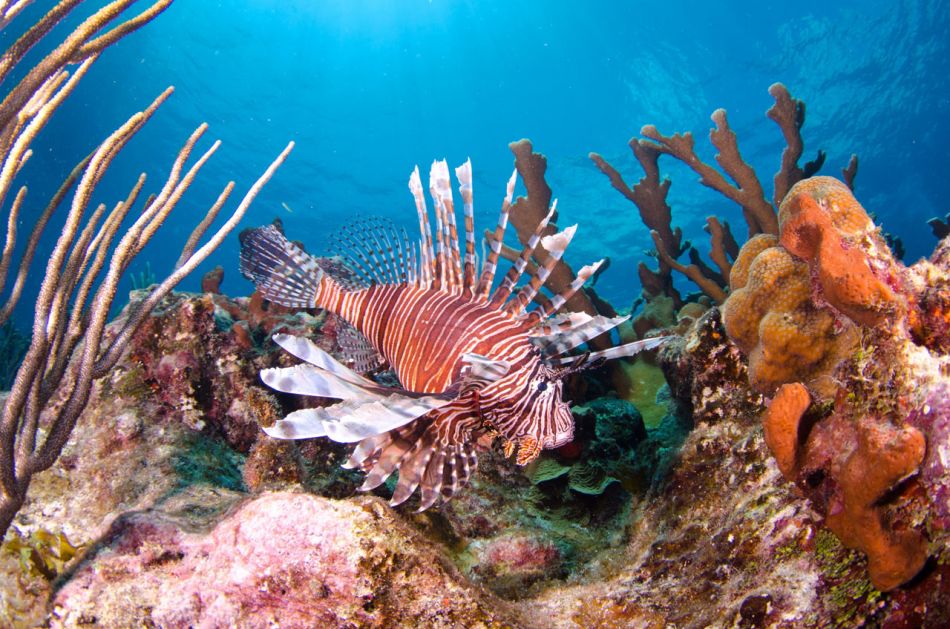 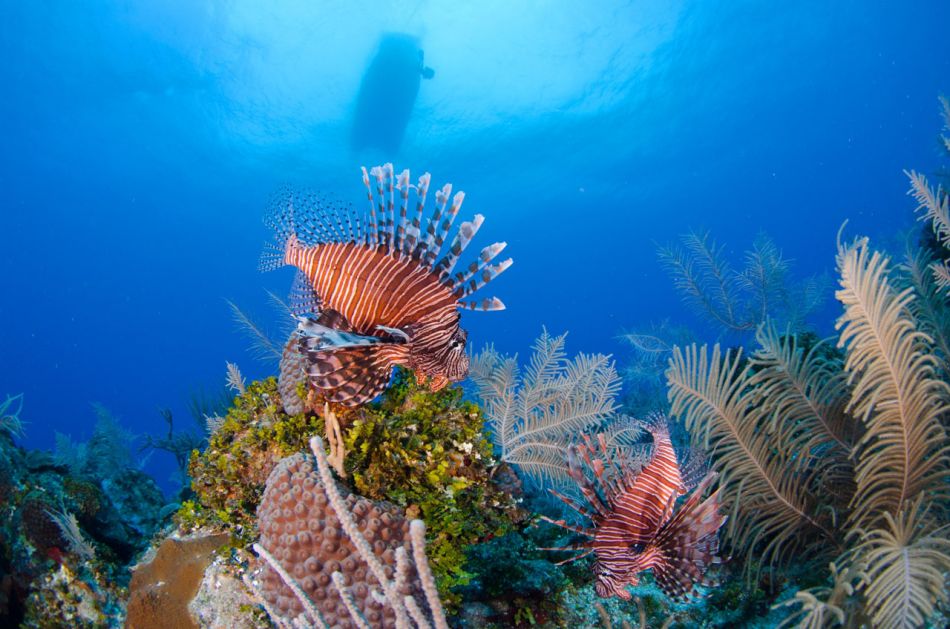 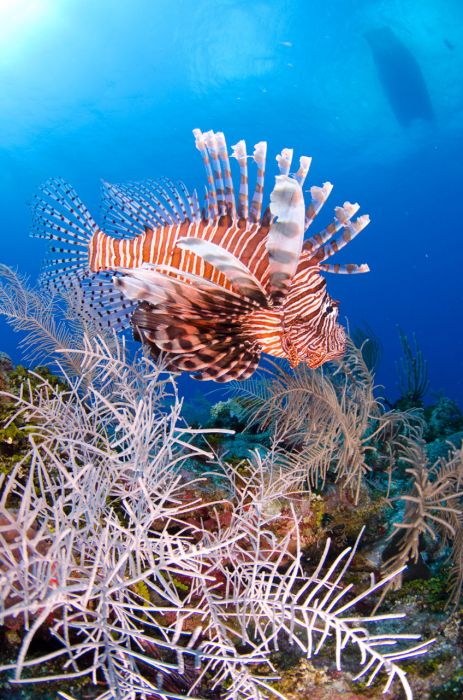 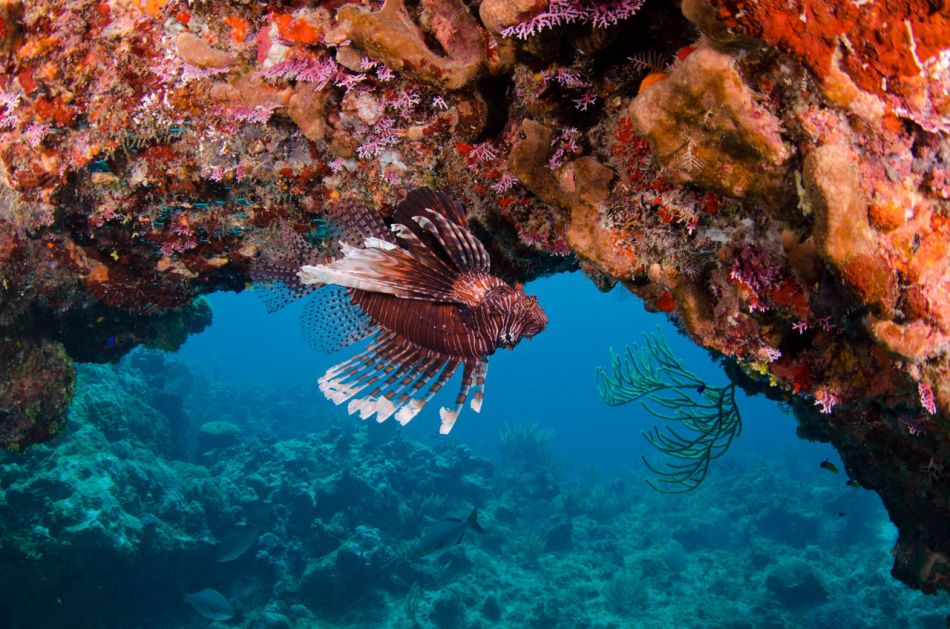 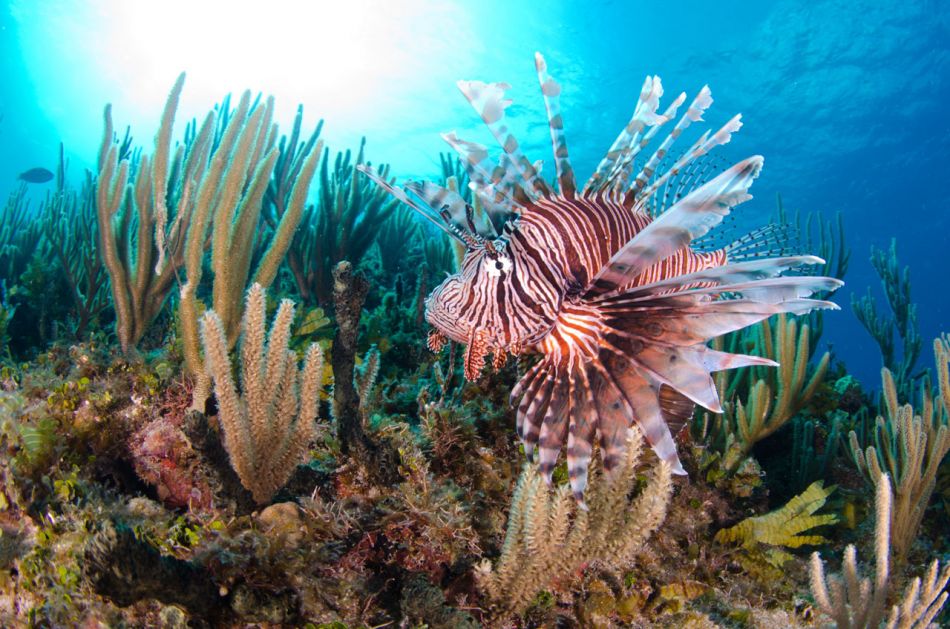 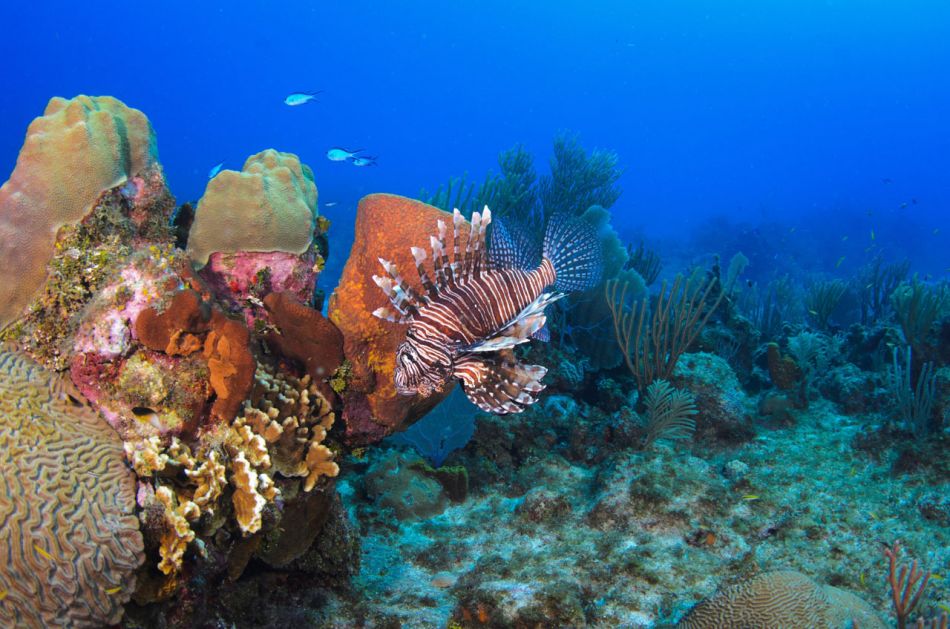 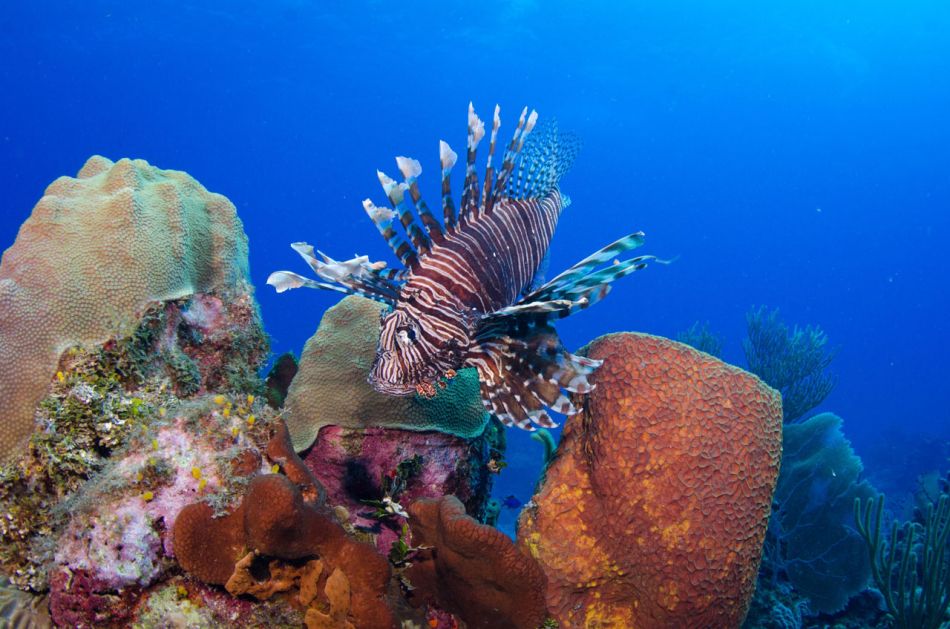 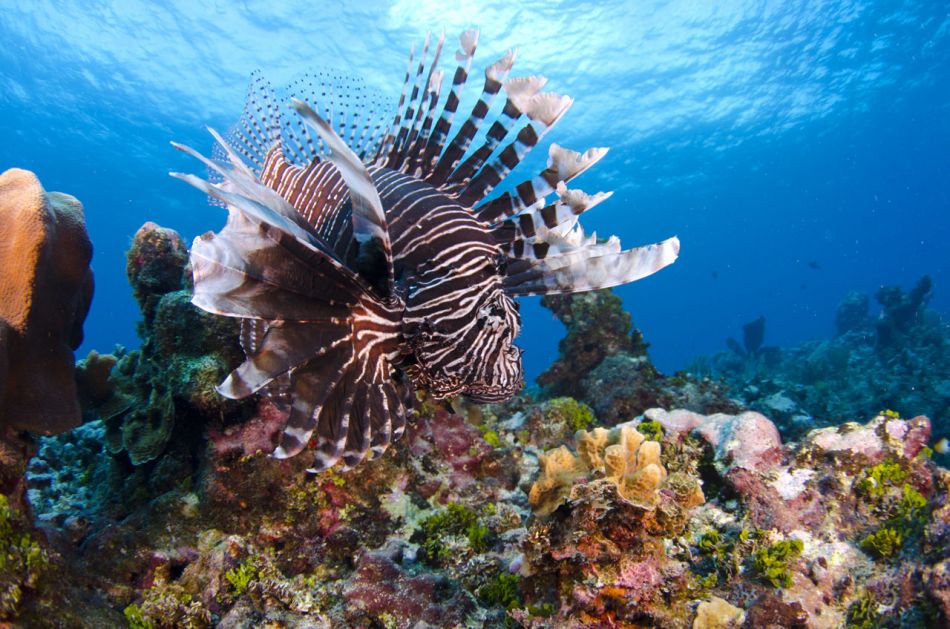 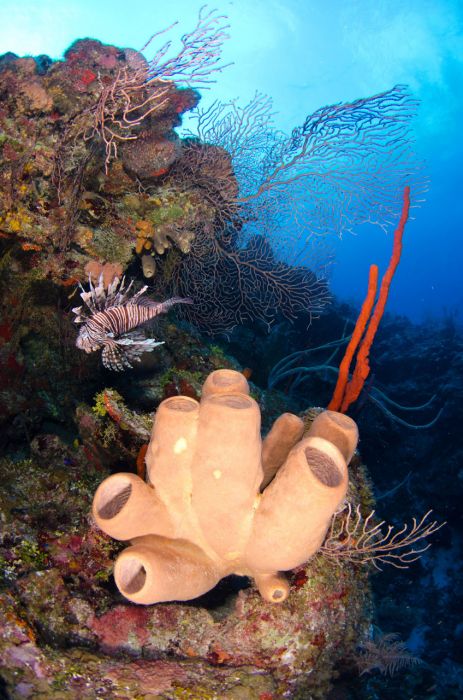 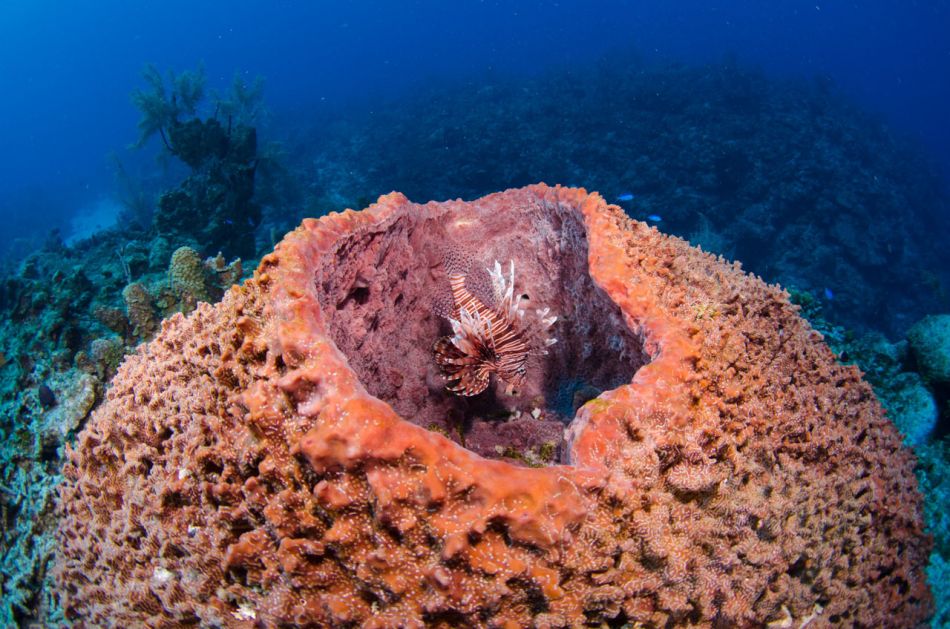 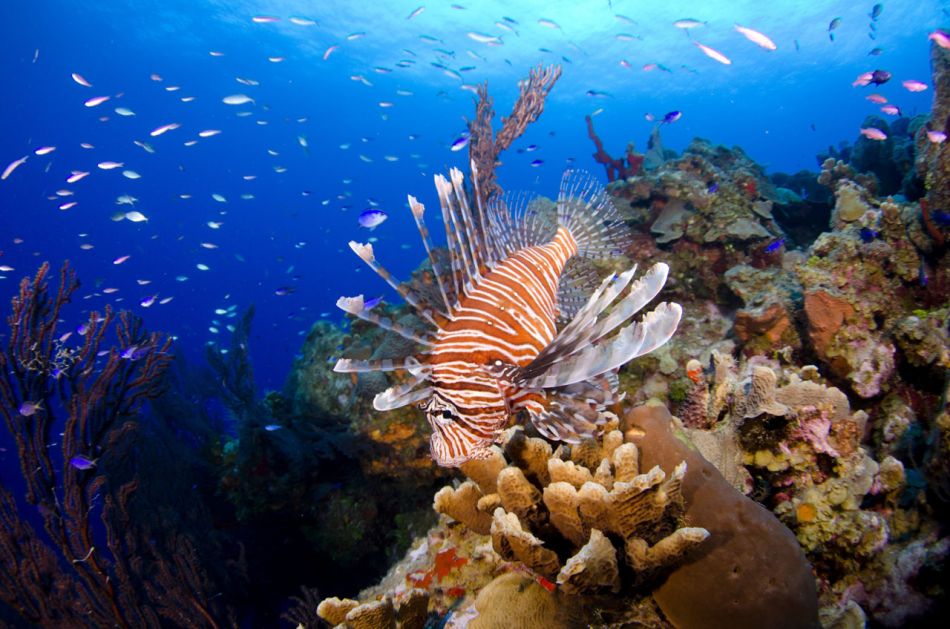 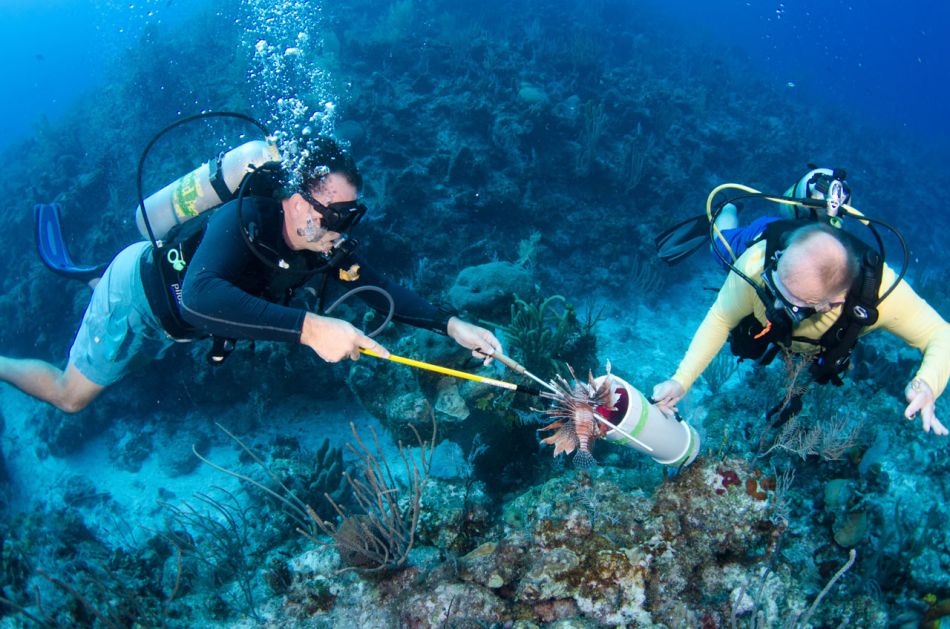 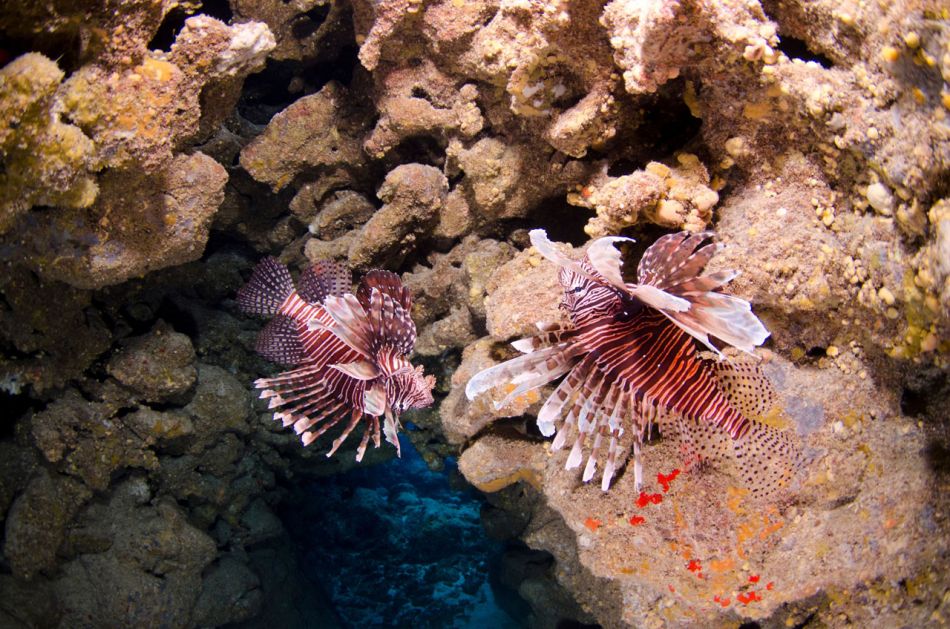 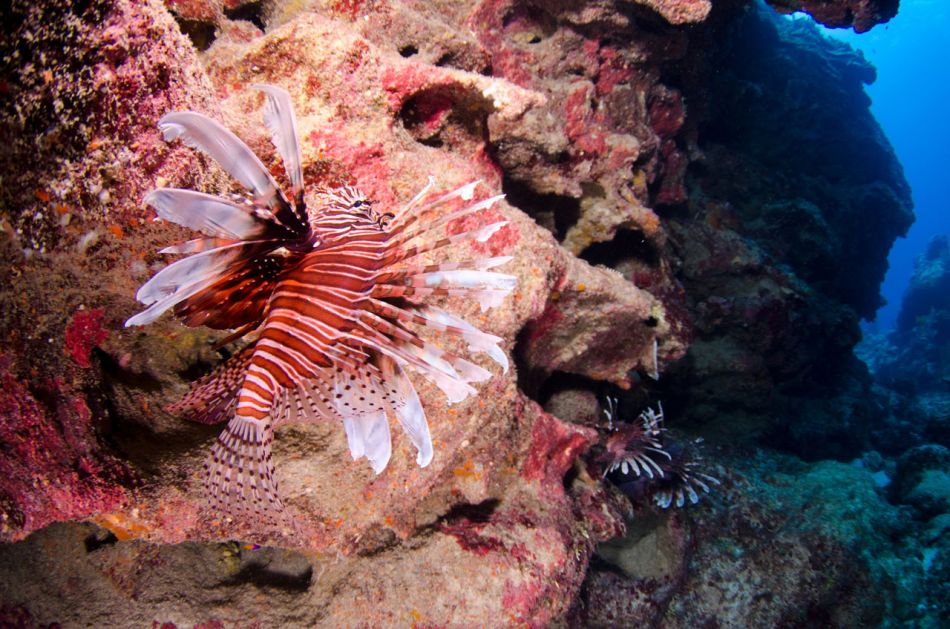 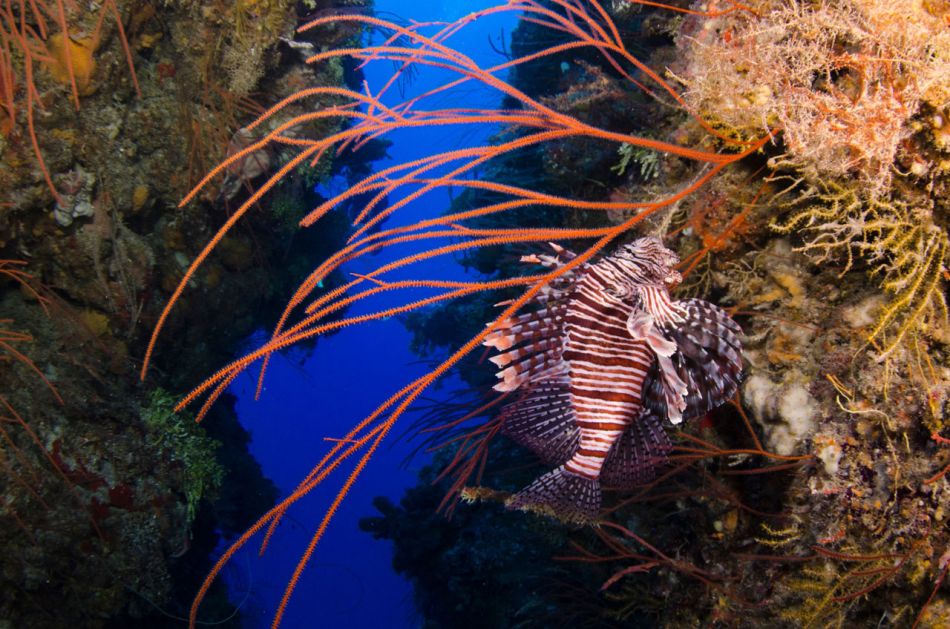