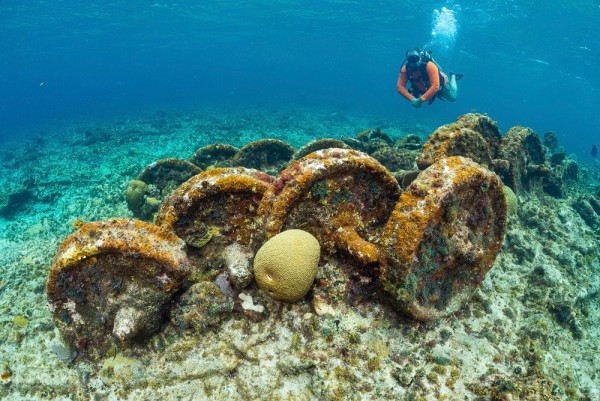 Dive shop owner Steve Broadbelt thought he had seen it all. That was until he stumbled across a train wreck in the shallow waters off East End in Grand Cayman. Partially buried in rubble and encrusted in coral growth, a collection of wheelsets for old-fashioned train carriages may have lay, hidden in plain sight, for more than a century.

Broadbelt, co-owner of the Ocean Frontiers dive shop in East End, stumbled across the wreckage on 22nd July 2019,  while doing maintenance work on the shop’s underwater webcams. “We were diving close to the south channel and I just spotted the outline of something unusual in the distance. It looked man made,” he said. When he and colleague Blair Lavelle who were using underwater dive scooters, took a closer look, they found multiple sets of axles and wheels.

“We must have gone past it every day without ever knowing it was there,” he said.

He said it was probably too shallow to be a dive site but will make an interesting stop for snorkelling between dives.

Now he is working with the Cayman Islands National Museum to determine the origin of the mysterious find. Initial inquiries revealed no known record of a ship carrying train stock going down in waters off East End.  Broadbelt has surveyed the site on several occasions since making the discovery and has sent images and measurements to the director of the national museum.

Peggy Leshikar-Denton, the director of the museum and a specialist in underwater archaeology, said the site would be protected under the Abandoned Wreck Law and could eventually become part of the Maritime Heritage Trail. She said an initial theory dated the wheel sets to the 19th century.  “I believe the cart wheels and axles may be related to the phosphate mining era of the late 1800s. We had tracks and phosphate cars and carts at several locations on Grand Cayman and also on Little Cayman,” she said.

Broadbelt said there were 13 wheelsets at the site, and speculates they were most likely cargo on a ship bound for Little Cayman or Jamaica.  Historians believe the discovery of old-fashioned train wheel-sets in shallow water off East End may be linked to the bygone era of phosphate mining in the Cayman Islands.

Caribbean historian Christopher Williams said the discovery, which is close to Cayman’s oldest settlement, Old Isaac’s, was a fascinating find.  He said the artefacts were probably jettisoned cargo. “Perhaps Caymanian wreckers had been in the process of salvaging what was salvageable from a wrecked merchant ship sometime in the 19th century on its way to Jamaica, and this particular load got away from them,” he said.  He added that any theory was speculative at this stage, and it was vital to get the artefacts dated and identified to compare them with what was used in Cayman and Jamaica at the time.

Broadbelt is continuing to conduct surveys of the site to take measurements of the wheels and axles to provide the museum with more information to trace the origin of the find.

The wreck site is in shallow water, close to the Old Isaac’s dive site, which is a regular stopping point for charters and lies on the south-east corner of Grand Cayman, less than a mile from Ocean Frontiers’ dock.