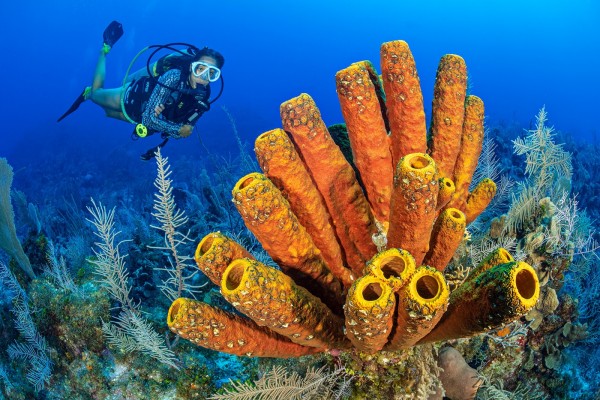 Cayman Islands (Feb 13, 2020) – Divers who jump into any dive site in the Cayman Islands these days will witness sponges at the peak of their life cycle on local reefs. This means sponges are healthier, larger and more picturesque than they have been for more than a decade. It has been 15 years since Hurricane Ivan struck the Cayman Islands and damaged the reefs impacting many of the sponges. The lack of storms since then has allowed them to grow back undisturbed. Alex Mustard, widely regarded as one of the world’s leading underwater photographers, photographs Cayman’s underwater world frequently and notes changes through the seasons.

“Hurricane Ivan leveled a lot of sponges on the north, east and south of the island, and I remember walking on Colliers beach straight after the storm and seeing loads and loads of sponges washed up,” he said. “A lot of them started re-growing then, and many have now reached maximum size and they look superb.”

“Sponges naturally fall off after they reach their maximum size and eventually regrow,” said Ocean Frontiers co-owner Steve Broadbelt, “but the hurricane wiped so many of them out at the same time. The quiet years have allowed them to reach maximum growth. It’s amazing to see them and we’re excited to show them to our visitors.”

Sponges attach themselves to the seafloor and filter water for food. These sea animals have been around for thousands of years, and more than 6000 species of sponges can be found in oceans around the world. Cayman’s warm, clear and nutrient-rich water is ideal for Caribbean sponges and local reefs house more than 57 species in various colors. Among them; giant barrel sponges, orange elephant ear sponges, ball sponges, boring sponges, rope sponges and the rare antler sponge. If undisturbed, a giant barrel sponge can live 130 years. One of the largest sponges in Cayman is an elephant ear sponge on the wall that measures 9 feet across.

Like corals, sponges play an important role in complex reef ecosystems. Boring and encrusting sponges compete for space with hard corals on the reef. Tube and barrel sponges give tiny goby fish a place to create their “cleaning stations.” Hawksbill turtles love to munch on the tough outer layer of leathery barrel sponges, and angelfish feed on the soft inside of the sponge left behind by the turtles.

Steve Broadbelt says that sponges, like corals, also spawn during the year but not necessarily at the same time. Seasoned divers will have noticed.  “Anyone who has been diving in Cayman long enough will have seen sponges spawning at some point. This is the only time a sponge visually demonstrates that it is actually a living animal.”

Scientists believe life-saving drugs can be found in the ocean. From a large shallow water sponge in the 1950’s, scientists extracted two chemicals used to treat patients with cancer and now HIV. With much to learn about sponges and their relationship to other sea animals on the reef, there is concern about risks to their habitats; bottom trawling fishing, underwater cables, oil and gas exploration.

Underwater photographers give Cayman high marks for its picturesque reefs and drop-offs, its marine life and wrecks, and it's warm, crystal clear water. The current splendor of its sponges is another reason to visit and document Cayman’s unbeatable underwater world.