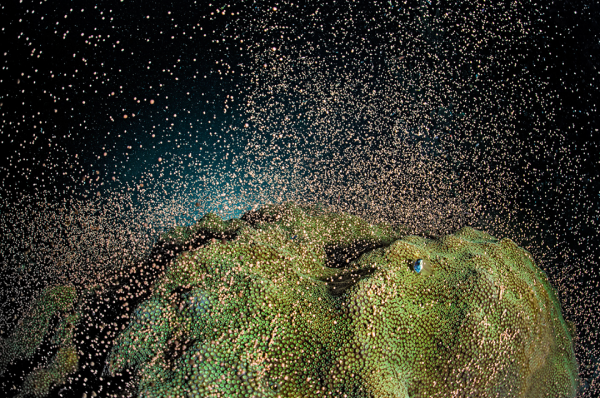 Reef corals spend most of the year pretending to be underwater rocks, but for a few special minutes each September, late at night, they explode into effervescent life in an effort to reproduce.

Grand Cayman, Cayman Islands - During a limited window of time, late at night in September each year, many of the corals in Cayman’s reefs spawn simultaneously, releasing eggs and sperm together to cross-fertilize and scatter in the current.  “One of the great lures of diving is that feeling of discovery - the thrill from seeing something that few others have,” says British marine biologist and underwater photographer Alex Mustard, explaining the lure of the annual coral spawning. “But as more and more people dive, rare treats are getting harder and harder to find.”

“We think that it’s tied to certain events or conditions, such as water temperature, the moon phase, and the ocean currents,” says Dr. Ellen Prager well-respected marine scientist and author, says the timing is critical because if the corals don’t release their gametes at the same time they won’t have the chance to cross-fertilize. “This is one of the most fascinating parts of the process because for corals there is no enticing mating dance or courtship in advance of spawning, and it’s not just one coral, it’s many and only once a year,” she says. “It also takes a lot of energy because they have to build up to it.”

The lure of the mysterious coral spawning is irresistible for divers, both locals and visitors.  Go out with Ocean Frontiers at East End for late-night boat dives scheduled every September. Working with Alex Mustard, Steve Broadbelt and his team believe that after 17 years, they have worked out a formula that predicts the time the coral will spawn.

“We’ve got it down to a 15-minute window, and last year it was 5 minutes out,” says Broadbelt. “One of the first cues that the coral is going to spawn is the brittle stars − they start to come out. If you don’t see brittle stars out, pack your bags and go home.” With some customers traveling thousands of miles to witness the event, Broadbelt says there is pressure to get the timing right for the “show”, and while they never guarantee that everyone will witness the coral spawning, Ocean Frontiers has had good success. But it is nerve-racking.  “So you get in, get comfortable, get camera set up and then wait. And then 10 minutes of waiting seems like 10 hours,” he says. “If you get in too early, you're going to run out of air – if you get in too late you are going to miss it and then you have to wait 365 days until it happens again.”

Alex Mustard remembers the first night he dove with Ocean Frontiers on the hunt for coral spawning. “In the excitement of flying across an ocean and heading out to the reef late at night, I had forgotten how much the odds are stacked against us,” he recalls. “Maybe we were too late? Maybe the corals had spawned earlier in the evening? Maybe they had spawned yesterday? Maybe they had spawned a month earlier? Maybe they just don’t mass spawn in Cayman? I look at my watch again.” But within 20 minutes, and with a bang, the main show starts - the ultimate underwater fireworks display. The crowd pleasers, according to both Alex Mustard and Steve Broadbelt, are the mountainous star corals, true to their name, that release thousands of bundles at once.  “The intensity of spawning is such that the visibility has dropped from about 80 feet to about 20 feet in just a few minutes. It is like diving in a blizzard, with the tiny fat-filled bundles drifting slowly to the surface like snowflakes in reverse,” says Mustard.

Dr. Prager says when coral spawns it’s like ringing the dinner bell for fish and other reef creatures. “It’s a feeding frenzy – eggs and sperm are like a buffet for everything else on the reef. All of a sudden lots of yummy treats are served, free-of-charge.”  The marine scientist says there is strategy involved in this type of spawning described as “broadcasting”. Millions of eggs and sperm are released because the corals are hedging their bets that a few eggs will survive long enough to become coral larvae and find just the right spot to land and begin growing into coral.  Survivors go where the wind, waves and currents take them.

Alex Mustard says although his original calculations had held up so that Ocean Frontiers continues to successfully take guests out to watch the spawn, its never a sure thing.  “This is nature and you can never be totally certain, when chasing five minutes in a whole year. That, of course, is part of the thrill,” he says. “As humans we are too used to bending the natural world to our will, but to see coral spawning we have to dive to natures rhythm."  Corals spawn at the same time on all three Cayman Islands. The different reefs of the world spawn at different times of year and the mystery of exactly why remains and continues to fascinate.